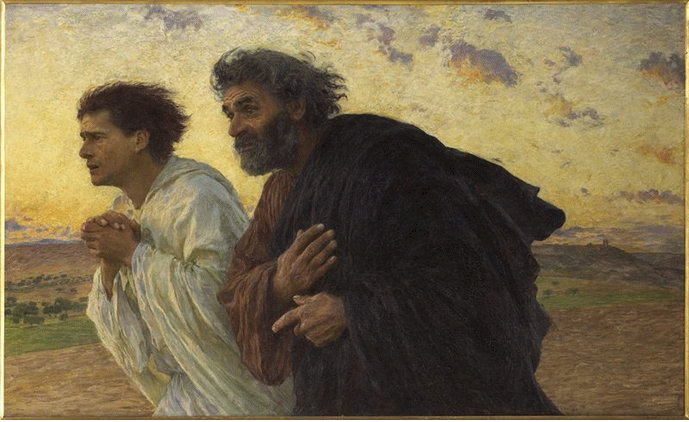 Lets pray,
Let the words of my mouth and the meditation of our hearts be acceptable to you, O Lord, our rock and our redeemer. Amen

James and John are going to be on the winning team, or so they think. Actually the disciples as a whole are in it to win it. The Gospels are full of stories of the disciples trying to claim their awesomeness up against each other, and other people in general. Somehow they even manage to add a competitive foot race between Peter and Disciple the Jesus Loved into the resurrection story. I want to share that race with you.

To add to this a bit. We don‘t really know who John the writer of John‘s gospel was, but if you ask me it looks pretty obvious. There is a person in the gospel constantly called the disciple Jesus loved, there are numerous reference mentioning how this particular disciple is better and more lovable than the others. He is even a faster runner than Peter. If you ask me, and I am not even a particulary great New Testament scholar, but have done a lot of work with young people and males in particular, it seems kind of obvious.

The so called disciple that Jesus loved, either wrote this himself or had some of his own disciples write up the story. The repeated use of the phrase the disciple Jesus loved, and the ability to add a substory about your running abilities when the story is supposed to be about Jesus‘ resurrection, kind of gives away who the source is here.

The need to mock silly Peter for being slower than you, in the midst of the resurrection story is also somewhat a good indication of the writer, in my mind at least. And by the way, this is not the only reference about the out of touch, slow Peter in John‘s gospel, those two might have had some beef.

Here I was thinking about adding a small skit about the time when John was convincing his scribe to add the detail about the race with Peter. The skit would start with the scribe saying:

Are you sure, you want to add a reference to this run three times in six sentences addressing the empty tomb, …

Then I remembered that I am not good at doing voices and the skit would probably end up being super awkward in a sermon.

But yea, when I read the gospels I sometimes hear in the background a real old boys locker room talk. The boys reflecting on the good old days, when they felt they were at the top of the world. There are reflections in the gospels about which one of them is the most awesome, most loyal, best runner, smartest, worst doubter and so on. And it is interesting to notice that maybe, the disciple proclaiming he was the disciple Jesus loved, is the same John being rebuked when asking to sit on Jesus‘ right hand according to Mark’s Gospel. The gospel writers apparently each have different disciples to mock and criticize.

When we read the gospels, it is important to recognize that even though Palestine was occupied by a foreign superpower, and the disciples were not part of the ruling powers, they had swag and some sway. Their guy draw a crowd. For a while they had a “rock star status” in their circle, or at least, “best friends of a rock star status”.

We see as well how it dawns on the writers of the gospels almost thirty years after Jesus resurrection, what Jesus was really trying to tell them, after facing the reality of being a part of persecuted or at best ignored religious minority.

Are you able to go all the way, do the right thing, no matter the consequences? Are you willing to stand up for tortured and killed journalists, even though it might cost you a HUGE arms deal and billions of dollars.

Back to James and John. They want to be on the winning team, they want to become part of Jesus‘ cabinet. They see themselves as part of the future ruling powers of Palestine. Our time will come, they think, and if we raise money and do a good job in the election campaign, there must be at least an ambassador position somewhere, or maybe a secretary of education job.

Except there was no election campaign, Jesus had no plans to create his own cabinet or to become a ruler of Palestine, Jesus wasn’t trying to become a new type of tyrant.

The writer of Mark understands that the disciples probably didn’t get it, at least not before the empty tomb. When the writer of Mark adds Jesus’ reply „For the Son of Man came not to be served but to serve, and to give his life a ransom for many“, we might think it is kind of obvious. Jesus isn´t in it to win it for Godself, but to expand understanding of love and service. However, we can see in the gospel that it wasn’t clear to the disciples what Jesus was telling them.

Here is an important caveat. When Jesus talks that we should serve one another in this particular context, he is speaking to those who historically and culturally where used to be served. He is addressing his disciples, not slaves. He is addressing men, not necessarily women.

He is addressing those not used to serve, calling them to reverse roles and structures in name of justice. In Luke’s gospel we have a different story, the story of Mary and Martha, two women. Jesus explicitly tells them to stop running around serving him, and instead take on a role that historically was not theirs, to sit down, learn and participate in conversations. I am quite certain there is a reason we don‘t have many stories of Jesus telling Peter, James and John to stop serving others, and just sit down and chill. The only hint at a narrative like that, ends with the disciples serving food to thousands of people gathered. However, that is a different story.

The gospel writers, are aware of Jesus’ message of equality and justice for all and upheaval of roles, even though they are simoultaniously steeped in a world of male power and dominance. This tension between Jesus’ teaching and the cultural world of the gospel writers, is not something only to be found back then in the olden days.

The tension between Jesus’ gospel, Jesus’ Good News to All, and our inate need for influence and power, is the story of Jesus’ church. It is the story of adapting Jesus’ message to Constanine‘s need for conformity and a singular religion in the Roman Empire. It is the current story of partisan play in many US churches today (and some would call us out for it too). It is the ongoing need for our people with power, without concern of the cost.

Mark‘s Gospel teaches us that Jesus doesn‘t play that game. Jesus knows that power play, influence, the ability to control others, easily leads to tyranny, to compromises and a need for conformity. Our role is not to lord over others, but stand up against injustice. Our role is to not stay silent, but to call out the oppressors. We are called to abolish the system of power and injustice. We are to celebrate the diversity in God’s creation. One way to do that in a democratic society is to go out and vote for equality, justice and peace.

For those of us in a place of privilege. Those of us who are used to be served, it means we are now called to serve.

We will fail, we are going to miss mark and focus on our own need for the best seat, focus on our ability to run faster than our favorite rival disciple. We will be tempted to give lives a dollar value. The gospel writers recognize our sin, and remind us that even those hanging around Jesus, missed the mark at times.

When it happens, when we fail, we are called to remember that Jesus is with us, even in our failure. God is among us, calling us to repent and rejoin God’s people on the way to justice and peace.

We are reminded that in the midst of the self-centered story about a foot race between John and Peter, the Tomb was empty. Failure, self-centeredness and death is never the end of any story, there is always a time for new beginnings, for empty tomb, for resurrection.