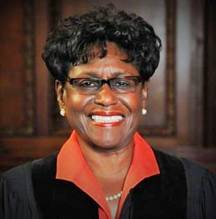 On September 16 2018, Pilgrim Member, Judge Patricia Ann Blackmon delivered a sermon at Pilgrim Congregational UCC. You can listen to her message by pressing the the play button below.

It’s a long way from Jackson, Mississippi to the Ohio Eighth District Court of Appeals bench. But that is the journey of Judge Patricia Ann Blackmon, known to us as Pat.

In Mississippi, Pat learned from her mother the basic and invaluable life lessons of hard work, responsibility, and diligence. Pat and her 10 brothers and sisters were thrown into poverty when the family was deserted by their father. Rather than succumbing to hard circumstances in the long years ahead, her mother taught her children that if they worked hard, good things would come to them. The children often would accompany their mother to her second job at night. It was during these desolate times that Pat began dreaming of becoming a lawyer. It was not going to be easy. The schools were segregated in those days and the Blackmon children could not attend the white school located just a few blocks from their house.

Upon graduation, Pat boarded a Greyhound bus and left all that was familiar. She was bound for Cleveland, Ohio to attend Cleveland-Marshall College of Law at Cleveland State University. She graduated in 1975 and she began to build a distinguished career in public service. Notably, Judge Blackmon served as a Chief Prosecutor for the City of Cleveland and the city’s first night prosecutor. Judge Blackmon also served as an Assistant Director of Victims/Witness Program and a Professor at Dyke College. Currently, Pat sits as a five-term incumbent at the Eighth District Court of Appeals in Cuyahoga County where she has served since 1996.

A few of her honors include induction into the Ohio Women’s Hall of Fame, recipient of the 1996 Alumna of the Year from Cleveland-Marshall College of Law, and notice at the 2001 “Evening of Stars – A Celebration of Educational Excellence” in a special salute to United Negro College Fund alumni. Further, Judge Blackmon is the first African-American woman elected to any Court of Appeals for the State of Ohio.

Pat’s life of public service is a fascinating story of overcoming obstacles. It has been an adventure that has tested her faith and cultivated her wisdom. On Sunday, September 16, Pastor Kelly has invited Pat to share some of her insights with us by preaching from the Pilgrim pulpit. You won’t want to miss it.