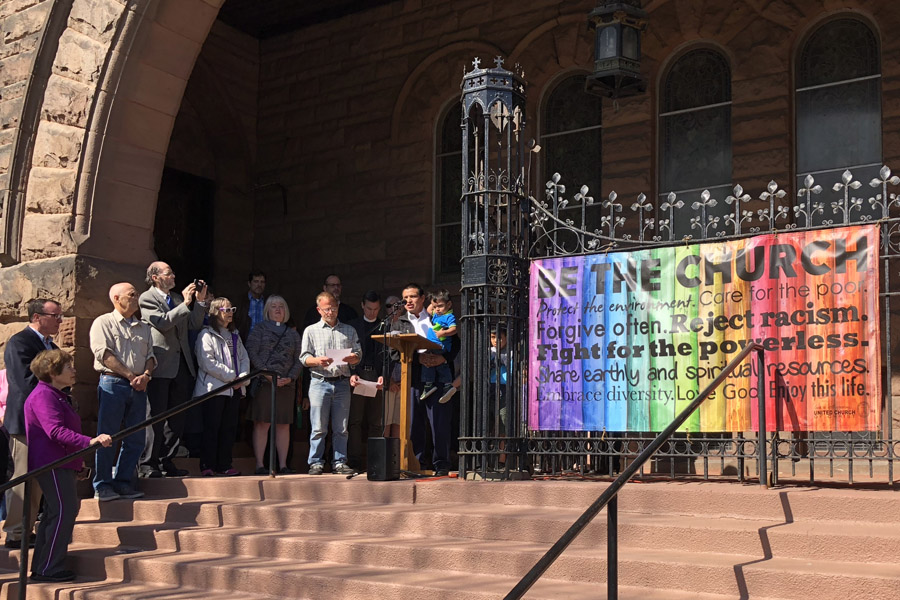 A married father of four U.S. citizen children recently sought sanctuary after being informed by ICE that he faces immediate deportation to Guatemala and separation from his family. Eulogio Hernandez Box has been in the United States for nearly 20 years, living and working in Central Ohio where he has been a tax payer, active church member and community leader. He has no criminal record.

Like many unauthorized immigrant workers, Box was reported to U.S. Immigration, Customs and Enforcement (ICE) and put into deportation proceedings after a traffic stop. His appeals ran out in 2017 and he received a notice to turn himself in to the ICE deportation office in Brooklyn Heights.

“In previous years, someone like Eulogio would be able to apply for and be granted a Stay of Deportation, or get his case administratively closed since he is not considered a threat to public safety or national security,” said Kelly Burd, pastor of Pilgrim Church.  “But with new executive orders under the current administration these options are no longer available, the Stays are given blanket denials, and another family is tragically separated.”

For now, Pilgrim Congregational Church is Box’s home.  The congregation recently voted to become a Sanctuary Church, committing to provide bold prophetic and public witness on behalf of more compassionate immigration policies and practices, to provide theological and historical education to help people grasp the circumstances and desperation influencing undocumented immigration, and to provide sanctuary for a person seeking to obtain legal status and under immediate threat of deportation.

“Our Christian faith compels us to love our neighbors and ourselves, and the Good Samaritan parable used by Jesus to illuminate that challenges the modern notion of a neighbor as one born within a shared border and region,” said Rev. Burd. “We stand with interfaith friends and local supporters against policies that are harming neighbors and needlessly tearing apart families.”

Pilgrim Congregation United Church of Christ is part of a growing sanctuary movement in Northeast Ohio. It is the third church in the region to provide sanctuary to an immigrant facing deportation in the last year, after Forest Hill Church Presbyterian in Cleveland Heights and St. Andrew Episcopal Church in Mentor. Current ICE policy maintains that enforcement is not to be pursued in sensitive locations including churches and schools. In response to aggressive deportation practices, several churches across the nation have begun to take part in this movement, offering physical sanctuary and support to immigrant neighbors.

Pilgrim Congregational United Church of Christ is a diverse, social justice-oriented protestant church in the Tremont neighborhood of Cleveland.  As part of its Sanctuary Church commitment, Pilgrim will host a community-wide Forum on Immigration on Wednesday, May 2 at 7:00pm.